Wii, and Wii U is home video game console released by Nintendo. They compete Sony’s PlayStation and Microsoft’s Xbox One. It is fact that Wii and Wii U have won lot of people’s favor for their cool game playing features. However, they also disappoint lots of people who have the need of playing videos on Wii or Wii U. Anyway, Wii includes Photo Channel feature which enables people to play personal photo and videos in the format of Quicktime (motion JPEG) format (MOV) or AVI (Motion JPEG) format (AVI). And with Wii U’s web browser, you can streaming MP4 files to use your Wii U to play video back on the TV or gamepad.

How to use Wii Converter to Convert MKV, AVI, MP4, WMV, MOV, etc to Wii/Wii U Supported Video Formats?

Note: The Wii Video Converter is a paid program with a trial limit – only half of each file can be converted. To use the full program, you can pay for license code from the “Order Now” link in the program to finish registration.

Press on “Add File” button to add the files you want to play on Wii/Wii U to the program. You can simply drag & drop your audio files to load to the Wii Converter. 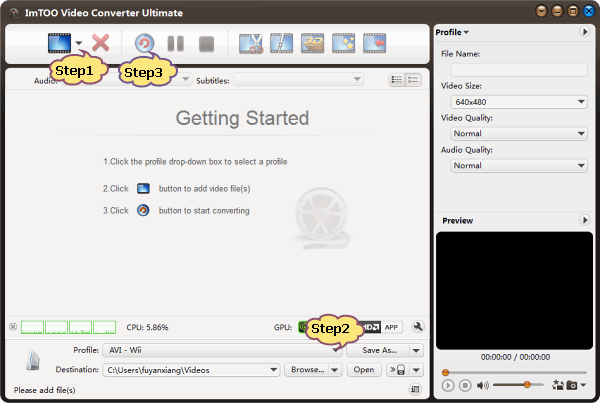 Part 2: How to Stream Video to Wii for Play?

To Stream video to Wii, after you convert your files to Wii AVI format, locate the converted files, then transfer the converted video file to SD memory card or USB, and then insert the card into the Wii and finally use the “Photo Channel” to play the video file on Wii on the go

Part 3: How to Stream Video to Wii U for Play?

To stream the already converted MP4 files, we can use Wii U’s web browser. By installing the media server Plex on your computer you can use your Wii U to play videos back on the TV or gamepad. Plex provides a nice web interface that you can access not just from the Wii U, but from your other computers, as well as apps for your smartphone, tablet, and streaming boxes like the Roku. There’s a premium version of Plex, but it isn’t necessary — you can do all this for free.

Links for Wii U: