VisualHub is the best and easiest converter and player program in the past. It can play around with various video formats and convert them into a vast array of video file types like say AVI, DVD, MP4 and MPEG, etc. VisualHub discontinued and isn’t availalbe any more. Even though you finally downloaded a copy of VisualHub, problem of registeration just aroused as registering isn’t possible anymore. Since the release of OS X Lion, TECHSPASION released an updater for fix a show-stopper bug preventing registration from working in Mac OS X 10.7 Lion and announced the support of VisualHub is ended. Many users just encountered VisualHub crashes.

For many peopel, even they find VisualHub alternative to replace VisualHub, no applications can fill the VisualHub-shaped hole in their heart. For some people, they think VisualHub is out of date with out of date user interface that is not user-friendly and does not work with a lot of video files and usually with script errors and other issues.

ImToo Video Converter Ultimate for Mac can play, convert between nearly all HD and SD format videos, and convert them into 3D videos with amazing image quality. Among the many video formats supported by this great Video Converter for Mac include AVCHD (*.m2ts, *.mts), H.264/MPEG-4 AVC, MPEG-2 HD, MPEG-4 TS HD, MPEG-2 TS HD, Quick Time HD, WMV HD, AVI HD, MKV, H.264/AVC, AVI, WMV, MPEG, MP4, MOV, MXF and many others. It can also work as an audio converter to convert between all popular audio files such as MP3, WMA, AAC, WAV, CDA, OGG, APE, CUE, FLAC, ALAC, and so on. 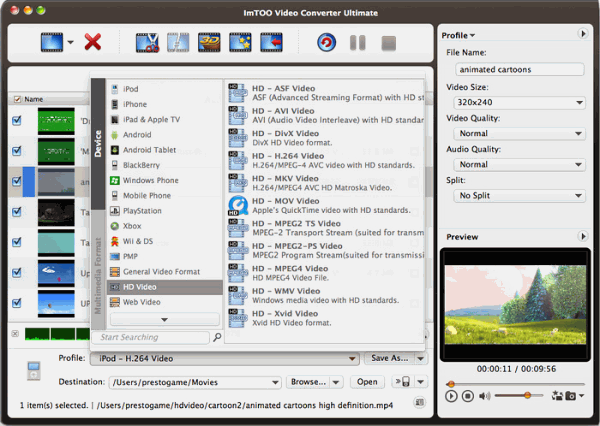 HandBrake is an open-source, GPL-licensed, multiplatform, multithreaded video transcoder. Handbrake can process most common multimeida files and any DVD or Bluray sources that do not contain any kind of copy protection and convert them to MP4 or MKV in MPEG-2, MPEG-4, H.264 or Theora video codec.